This post has nothing to do with Israel, except that the pictures were taken there. But they aren’t really Israel-specific. They are flowers and water, and things like that. You know, pretty pictures that happen to be taken in Israel. 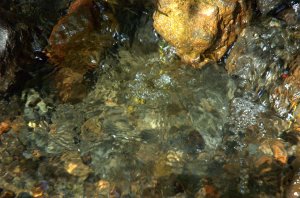 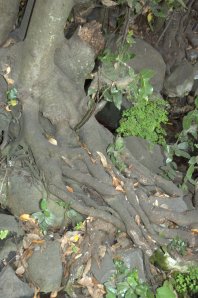 And, in addition to the photos in the post, there are a bunch more in the gallery at the bottom.

A Year Since CubeSpace

Looking back over the last year, it has, without doubt, been a tough year. The search for work continues. The economy is weak (I know, shocking news to you), and looking for work is no fun at all (also a revelation, I’m sure). Yet time moves on, and with time comes some perspective.

I look back on CubeSpace and remember the wonderful events we helped host: barcamp, WordCamp, CyborgCamp, and so many others. I remember the conversations as people fell into the vortex of the front desk and would sit chatting for hours. The never-ending stream of coffee.

Most of all, I remember the people. So many folks who were so much a part of my (and Eva’s) daily life, whom I see only sporadically now. People who helped out whenever they could. People who stopped by because they happened to be in the neighborhood. People who just had a quick question. Oh, and folks who wanted to get a little work done, as well.

The mix of the various elements of the day, and questions seemed endless. One minute I would find myself wrestling with a computer networking issue, the next answering a question about Judaism, or doing unofficial pastoral counseling, and then brainstorming a marketing strategy for someone.

I also remember arriving at 6:45 in the morning, sometimes staying until 9:30 in the evening. Eva and I needed to plan life to swap off taking care of CubeSpace, and saw far less of each other than we do now. Getting out of town was a major hassle, arranging adequate staff coverage for our absence.It was exhausting, and sometimes we felt like we were dragging ourselves through the wilderness.

A year later, I still miss CubeSpace, and probably always will. I remember the wonderful parts and the hard parts. But it is a time past, which will not come back.

The summer begins, the longest day of the year. There are new beginnings yet to be had in life, but some things drift into the past. As the length of day is changed by the season, we are changed by the events in our lives. I am forever changed by CubeSpace in ways that I hope are positive. I hope many of you have also been changed for the better by CubeSpace.

A year later, I thank you all who participated with Eva and myself in the bold experiment we called CubeSpace.

As promised, I’m doing the Israel recap in chunks. Today: Caesaria. An ancient city built by Herod on the coast of Israel, dedicated to his patron, Caesar Augustus. Archaeologically developed over the last fifty years to reveal many of the original structures, it includes an ancient Roman theater (which many of us would call an amphitheater, but which our guide informed us was really a theater because it was only a semi-circle of seats, not a full circle). This stage and stone seats is still used for concerts today, and apparently holds about 4000 peopl 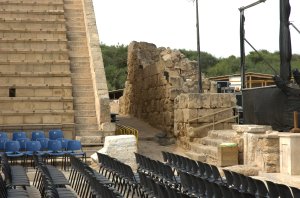 If I’m recalling correctly, Caesaria was our first interaction with a large scale Roman ruin (though assuredly not our last). It provides an interesting view on how ruins in Israel develop, the layering of cultures on top of one another. In order to truly appreciate this, a (very) quick history lesson is probably useful.

The land which we now call Israel was inhabited and ruled by, in succession:

Each of these cultures, (especially from the Romans forward) has their own distinctive architectural styles, but, for the most part, were building on top of the ruins or foundations of what came before. Thus we get walls such as this, in which a carved lintel from an earlier period is integrated into a later wall: 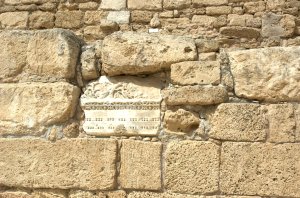 or this, where a wall is composed of various styles, clearly from different periods of construction: 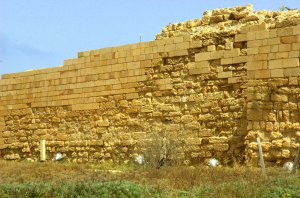 I find the interaction of the various periods fascinating, not least because of the ways in which the different stone finishing techniques catch shadows and light differently.

As you may or may not know, my undergraduate degree is in Classics (Greek and Roman), and therefore I have a certain fondness for the relics and stories of those cultures. One carved stone element, in particular, caught my fancy in this regard: a carved head of a gorgon. 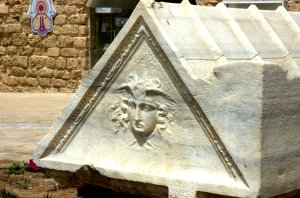 The layering of cultures is extensive: an ancient Roman city and port, but also the minaret from the 18th or 19th century (built upon a crusader ruin, which you can’t see in this photo: 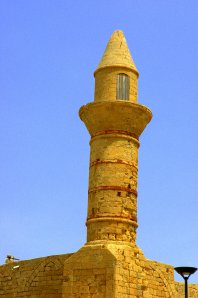 In the interest of not writing a full travel log, and thoroughly boring you, I will append the rest of the photos as a gallery for browsing as suits your pleasure.

Caesaria, is a walk by the sea, through an ancient town. Like much of Israel, history is present in each step, and somehow feels more alive than in other places, as one sees the edifices of one culture re-purposed for the needs of another. The enduring message, for me, is that everything passes, and our great achievements are only the building blocks for those who come after.

Eva and I arrived home yesterday–or at least our bodies did. I’m hoping our brains catch up sometime in the next day or so. The combination of jetlag, 24 hours of travel from Tel Aviv to Portland and an amped up caffeine addiction from all the great Israeli coffee have left me a bit out of it, but I trust a little more time will restore me to full functionality.

The trip was great. We spent lots of time with family and I got to know some of my younger cousins much better. Touring around Israel was beautiful (and there will be photos coming…I took over 1000, but haven’t done any editing yet). For the first time in 30 years, I was in Israel in a relatively peaceful period, which meant we were able to travel with far less concern for safety, and spent more time in places I haven’t been–like the old city of Jerusalem. All in all, an amazing trip.

As always, Israel is a complex place. No matter what your political persuasion, there are elements to Israeli society and politics that are challenging. As one tour guide put it, “the problem is that everyone is right.” With many competing ideologies and claims, it is not a restful place to be,  but it is thought-provoking. The situations there confound easy answers, and perhaps that very complexity and challenge is part of the spiritual richness of the land.

More posts and pictures will be forthcoming as my brain and body reunite, but I wanted to provide a first set of general reflections before memory faded any more.

USAirways has me too Upset to Write

Right now, I’m supposed to be in Philadelphia, getting ready to get on a plane to Tel Aviv. I’m not. I’m in my dining room because the USAirways flight we were supposed to take this morning canceled due to a mechanical error.

I understand that breakdowns happen, and agree that airplanes shouldn’t fly when broken in ways that might endanger safety. So I thought I would sit down, and muse a little about how life turns out differently from what you expect.

Except . . . every time I try to write that post, I realize another way that USAirways screwed up this morning and made the situation worse. Then I spend a few minutes calming down, and feel like I can write rationally again . . . and realize there was another layer of screw-up that I didn’t notice at the time. Let me give a few brief examples.

We were delayed at first, but didn’t know how long, because they couldn’t get maintenance over to look at the plane until a good hour after scheduled departure. It took almost another hour to decide that the flight couldn’t go. At which point they told us to get off and talk to the agents about rebooking.

We get off, and the agents suggest we call the rebooking center. Which I do. At which point the person on the other end tells me the flight isn’t canceled. I assure her it is. We go back and forth for a few minutes, until the gate agent announces that maybe operations hasn’t informed anyone the flight is canceled yet.

Finally, we can start booking. And she finds us a flight that gets in about the same time as the original flight. Of course, it makes two stops, instead of one: Charlotte and Frankfurt. I’m more or less okay with that. Then she tells me the first flight doesn’t leave until 10PM. I ask if she’s sure the flight arrives in Tel Aviv on Thursday afternoon. She assures me it does, and  continues to book us on this flight. As she is working on that, I start doing some mental arithmetic. The original flight was supposed to leave Portland at 8:45AM, and we had a 4 hour layover in Philadelphia leaving Philadelphia around 9PM, arriving in Tel Aviv at 3:15PM tomorrow (Thursday). If we leave Portland tonight at 10, it must be a red-eye, getting into Charlotte arriving around 6AM tomorrow morning–or around 1PM Tel Aviv time. I’m dubious about their ability to get us from Charlotte to Tel Aviv in two hours, especially with a change in Frankfurt. I suggest the agent double check that it arrives THURSDAY afternoon. She reassures me it does. I suggest she really should check that again. She becomes a tad upset, but does check. Wonder of wonders, it turns out it arrives FRIDAY afternoon, involving 2 red-eyes. I suggest she should find us better flight arrangements.

Turns out, there is no way to get us to Tel Aviv on Thursday, because now there is no time to get us to Philadelphia in time for the original flight. And it goes on like this. we must have spoken with a dozen USAirways representatives, and got different answers from all of them, almost all of which ended in “no.” But for different reasons.

The flight canceled at around 10:30 this morning. We didn’t get out of the airport until 1:30.

Since then, as I’ve thought about the situation, and tried to write about it, I realize how manner layers of mistakes they made, from not having the staff available to check the problem earlier, to not realizing what the cut off would be to get people booked on other flights, to not informing their own people they canceled the flight, which meant that any flights that might have gotten us to the East Coast on time had already departed.This didn’t occur to me until hours later, but then I don’t run an airline.

Every time I fly USAirways, I vow never to do so again. And then I relent. I say, “how bad could it be?” I decide to do so because it’s a little cheaper, or the rest of the family is taking that flight, so it will be easier when we arrive in Tel Aviv (which is why we booked USAir this time). Hopefully this time, I’ll remember. And I’m passing on my experience, so that maybe you all may be saved a similar fate. The problem  isn’t the mechanical issue: the problem is the way it was dealt with.